Mr José Luis Wagner, Head of Tourism Competitiveness at the Government of the Valencia Region presented on behalf of NECSTouR the network's cases and recommendations on the Impact of Brexit on EU Regional Tourism and the perspective from Scotland, on the occasion of a specific hearing organised by the Brexit Intergroup of the European Committee of the Regions on the 27th of June 2019. 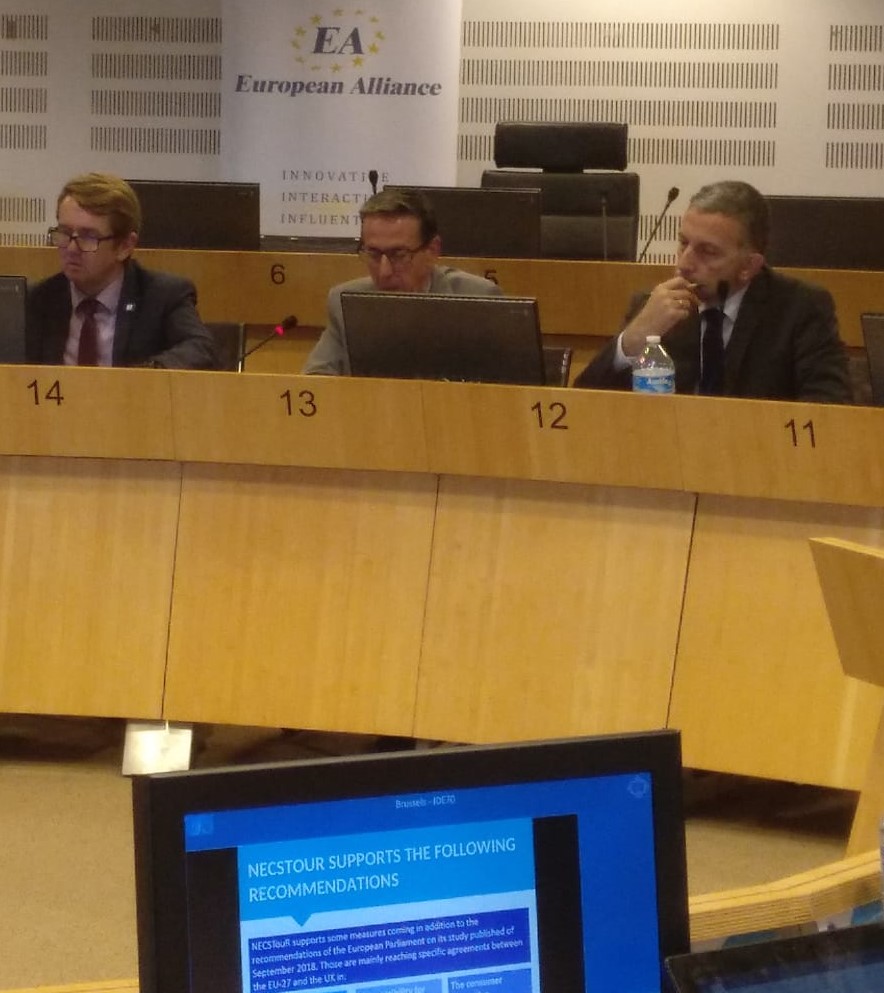 Five urgent recommendations. Based on their experience and ongoing assessments and a further overview on Brexit delivered one year ago for the European Parliament (read more), the NECSTouR Regions called for the following five urgent measures:

1. A citizen-friendly Brexit.
2. A consultative role for this Committee to monitor the process regarding those aspects affecting directly regions and local entities.
3. Anticipation and mitigation measures to cope with any possible negative consequences of Brexit, more specifically in those European areas which economies are directly dependent.
4. Developing measures to guarantee health care of EU citizens in the UK and vice-versa, besides the mutual recognition of social security and pension systems.
5. Preventing obstacles to trade relationships such as customs or administrative to not damage the regional economies

Capitalising Regional practices. Additionally, Mr Wagner called the European Union to support and coordinate the measures that the most affected NECSTouR Regions are already undertaking, to achieve: a pan-European contingency plan; real time information, monitor and forecast; policy reciprocity promotion with regard to citizens and workers; an agreement guaranteeing the air connectivity; creation of a central point of information for British travellers.

Brexit and the Spanish Regions. Since Spain remains the main European destination for the British visitors and the Regions visited by them - the Canary Islands, Balearic Islands, Andalusia, Region of Valencia and Catalonia – are all NECSTouR members, Mr Wagner gave a focus during his intervention on how these Spanish Regions are addressing the risks related with Brexit.

Concerns and measures from other NECSTouR regions seriously concerned by Brexit have been reported as well, such as Tuscany and Veneto (Italy), Flanders and Wallonia (Belgium) and the Donegal County (EIRE).

Common trends identified includes the overall impression that British tourist keep a high intention to continue travelling to EU, although are worried by administrative barriers and costs related to the Pound devaluation.

Key factors and concerns from Scotland have of course, also been taken into consideration. They include business uncertainty and concerns on availability of labour. For this reason, Visit Scotland is taking several counter-measures, including the Scotland is Now Campaigned, to encourage visitors to not only holiday, but to live, work study and invest in Scotland.

In the conclusion of his intervention, Mr Wagner stressed the importance for the NECSTouR Regions mainly concerned by Brexit of some of the recommendations delivered by the European Parliament in a study published of September 2018:

- Key areas such as the visa system and immigration controls, the issue of health insurance to preserve the level of protection guaranteed to the travellers;

- The consumer protection, for example in terms of passengers’ rights in cases of delays or cancellation of flights as well as in terms of booking;

- The mobility of the workers (focusing for example on visa rules, tax and social security unification health insurance) with attention to seasonal workers.