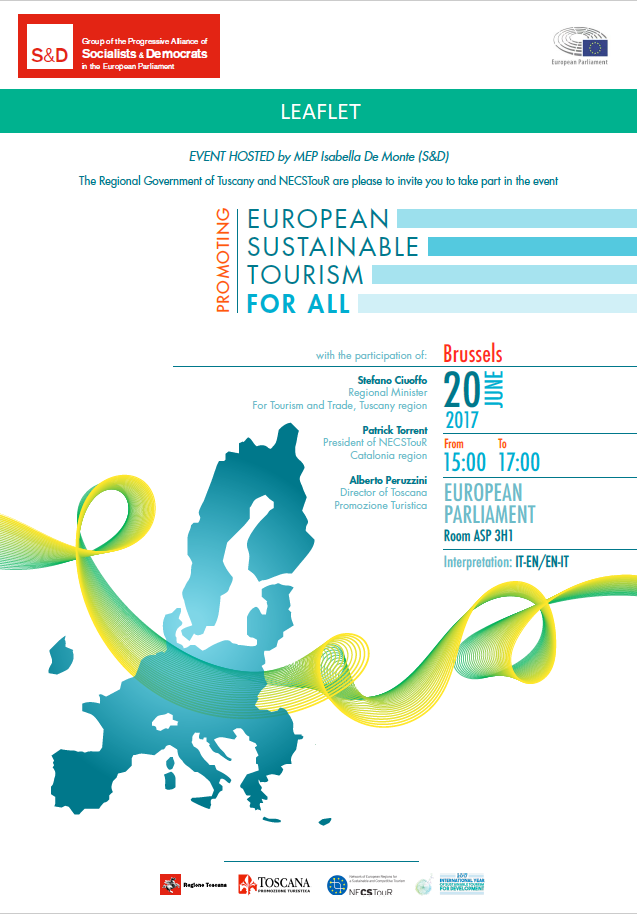 "Promoting European Sustainable Tourism for All" at the European Parliament

NECSTouR took the debate about the promotion of an European Sustainable Tourism for all at the European Parliament on the 20th of June though a well participated thematic public conference.

As MEP De Monte stated on her introductory remarks, the goal of this event was to animate a debate and to provide suggestions to the main European and Regional policy-makers on such an importan topic.

"For NECSTouR - replied Mr Patrick Torrent from the Presidency of NECSTouR - accessible tourism is tourism, is quality and competitiveness, is transversal and entitles integrated approach and coordinated policy measures, is sustainability and it brings social responsibility, economic benefit, quality and differentiation to destinations!"

The event has been animated by the the best practices of some of the members of NECSTouR: the Tuscany Region, Flanders, Scotland, Île-de-France and Västra Götaland.
The PPTs presenting that good practices are available here below.

The event, has been organised together with the MEP De Monte and the Tuscany Region and saw the active participation of several NECSTouR Regions, the Regional Minister for Tourism of Tuscany, representatives from the European Commission, the Committee of the Regions and all the main relevant stakeholders involved in this field.

"We reiterate our willingness to reinforce our cooperation align our forces as from today! " Concluded Mr. Torrent.

See the pictures of the event